Pleasant weather and I found myself on the bike without really thinking about it. I headed to Harperley junction and fancied giving Billy Row Bank another shot. Now I knew what was coming, i wouldn’t get to the top with energy in reserve. I could leave it on the hill. I aimed to go up 30s faster than last time, but had no idea how to use Strava’s live segments. Made it up in 5:13, 27 seconds faster than last time and a full two minutes faster than my first attempt in February.

I rested fast on the way down to Willington and on to Hunwick. Got some encouragement from a bloke with crutches as I crested one of the smaller hills, carried on down to Bishop, and returned home via the Etherleys.

How many times in an hour can I ride the hill in our village? Ten, it turns out. If you allow me one ‘I’ve started, so I’ll finish’. That’s two more than in March, so I must conclude I’m getting fitter.

Thirty miles to do to reach target for the week. I have a ride planned in Glasgow tomorrow, but in case something goes wrong and that doesn’t happen, I want the week in the bag.

A pleasurable ride leaves me sitting in Stanhope station nibbling on a homemade fruit scone and sipping fresh coffee – a reward my 14 leisurely miles doesn’t begin to warrant.

Some motorcyclists on vintage machine talking about their plans for the day taunt one of their group about the chances of his bike making it up Crawleyside. Crawleyside Bank: nearly 900 ft in 2.5 miles and part of the road route for the C2C. In my backyard and I’ve never been up it. Down it plenty of times, but never up. Time to earn that scone!

I set away and passed a few C2Cers as they got going. It got steep quickly and I passed gravel traps designed to catch out of control trucks. I hoped not to meet any coming the other way. Then out of the little hamlet of Crawleyside, the wind picked up. More C2Cers – all women – churning out the pedal strokes. I chatted and encouraged as I passed. Over the cattle grid that marks the start of the moors proper and It felt very exposed. Cold wind, dark clouds and spots of rain in the air. I ploughed on to reach the first summit, which gives brief respite before the final assault to the top. Even on a day like today with heavy air and low skies, the view from the top is wonderful. I turned to watch the C2Cers one-by-one reachimg the turn for Parkhead cafe, their last summit on the route – all downhill for them from now on.

And for me too. The wind made the descent tricky, but a few minutes later I was back in Stanhope making my way down the dale home.

In Glasgow for work on Monday, I arranged to meet up on Sunday afternoon with an old colleague who’s just got his first road bike. I negotiated a ride of 30-35 miles, knowing that 32 would take me over 100 for the week. We headed south out of Glasgow toward Newton Mearns on a series of unsegregated cycle lanes that were well thought out and poorly maintained. I got to practice my bunny hops several times. Just south of Mearns, a segregated track started tracking the A77 down towards Ayr. We followed it past the turn for Eaglesham Moor and took the turn for Galston. A quick map check at Galston brought home the reality that the ride was to be more than 30-35 miles. My guide was estimating 40. He was doing that to make me feel better.

It was beautiful weather and the A71 fabulously quite late on this Sunday afternoon. We passed Loudon Hill a local beauty spot and landmark and I realised I was running out of water. I’d brought no energy products – don’t need them for a 30 mile ride…

My guide took pity on me and opted for a direct route back through some delightful country lanes and then we could see the whole of the Clyde valley set out before us. It was downhill from there – very steeply in part.

The traffic grew as we got back into Glasgow. So did the annoyance of stopping at traffic controls. All in all an enjoyable ride – even if it was 50% longer than I was expecting. 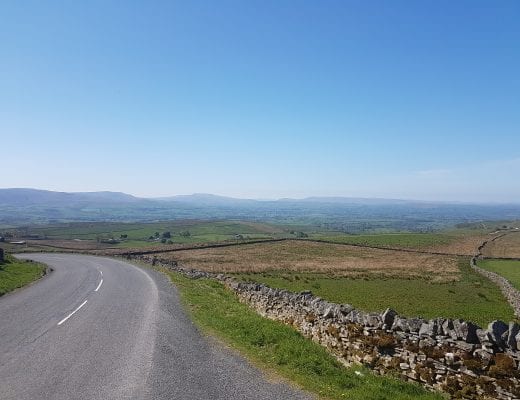 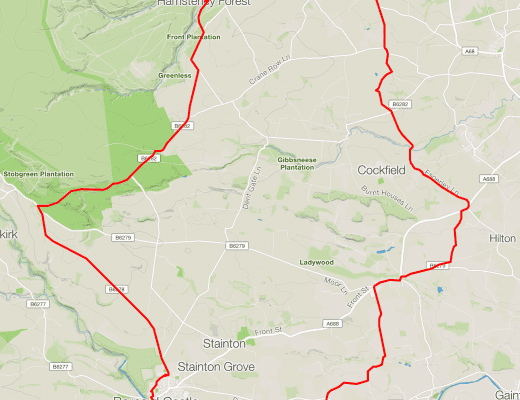