8.30am. Most of Masham was still sleeping. Only the local doctor’s surgery was doing a brisk trade with a queue of a dozen or more patients trailing into the street.

The wide expanse of the town’s square is impressive and I gave myself  a guided tour, finding in the top corner a cairn that commemorates the arrival of the Tour de France in 2014.

I set off for Lofthouse ten miles away, thinking I’d be there for coffee in an hour. But these are Tour de France roads and organisers don’t set the professional peleton off on nice, easy jaunts. The hills were hard. Then harder. Then even harder. On the last, I walked the steepest bit. It was like climbing a wall. 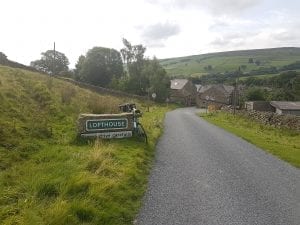 The desent to Lofthouse was equally dramatic. At the bottom my hands ached from pulling the brake levers for so long. A roll down to Pateley Bridge for coffee and cake at Rachels’s tea room. 17 miles done.

Rolling hills and more steep climbs over to Otley with a glorious descent into the town. Back into full-on urban cycling for the first time since Lanark on Day 6, which is amazing, and a quick stop in Titas Salt’s peaceful Saltaire.

What a surprise Bradford was. Grand buildings, wide avenues, open parks, and the splendour of a city centre that uses modern architectural tricks to accentuate its heritage. It was wonderful, even on a cloudy afternoon.

I found accomodation near Penistone and plotted a route. I’d been dreading the early evening traffic between Bradford, Huddersfield and Dewsbury, but I needn’t have worried: the ever-brilliant Sustrans had already thought of and solved the problem with the Calder Valley Greenway: part of National Cycle Route 66.

The Greenway took me on a smooth, tarmac path to four miles from the hotel and a short while later I arrived at The Woodman Inn in Thunder Bridge.