If there were any doubt in my mind about the size of the task I’ve set myself for this next week, it evaporated in the mountain views that passed my train window over ten and a half hours.

The 07.24 from Durham due, after 3 changes, to arrive in Thurso at 17.50. For those of you who think Durham is in the far north, there’s an awful lot of north north of Durham. In fact, there’s more North north of Durham, than there is South south of it.

In Edinburgh, there was a recumbent bike taking the whole of a space meant for two bikes, so mine spent the journey to Perth getting eveyone’s way. The recumbant’s owner, a really pleasant guy called Rad from Leith, was was travelling to Wick for the start of a week-long ride back home.

Recumbent bikes fascinate me. I love that I’ve found a sport that means I can sit down until I reach cake; these guys get to lie down on the way there and back.

Rad is as enthusiastic about these bikes as every recumbent cyclist. He was great company and we exhanged stories for the entire journey.

The train didn’t arrive in Thurso. At Dunrobin Castle, we were told passengers for Thurso had to get a bus. I had 2 stops to get changed into cycling gear and load the bike. Rad helped and we wished each other a good ride. He stayed on the train for Wick. 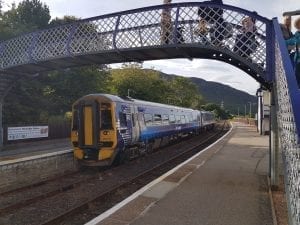 It turns out a coach ride where the driver has instructions that passengers are late for a ferry they need to catch, an hour away on narrow, windy roads, is going to be a memorable experience. It’ll certainly have you reaching for a seatbelt. 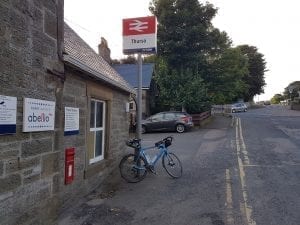 I had just 90 minutes to make it the 20 miles from Thurso to Strathy, if I wanted dinner. With headwind and hills, I just made it.

Let me recommend the Strathy Inn to you all. Heather and Craig run a fabulously friendly little pub with rooms and serve fabulous food.

Today has been an intro, a prelude, or prologue. Strathy point is three miles away. That’s where I’m heading after breakfast to start this adventure properly.

Hey Paul! I’m glad you made it. I had to push as well to get to my camping site on time. Sorry for taking so much space on the train- blame Germans for making my bike so big 😉 I hope you’re going to have wonderful journey. Gura math a thÃ¨id leat!

Looking forward to the next instalment.

[…] I just finished Paul’s account of his eight-day adventure from his home in Weardale to Inverness, covering more than 500 miles, and wondered if he’d posted the photos from his trip anywhere. Unfortunately it seems those photos aren’t included in the blog (let me know if I’ve overlooked them), but he does have photos and accounts of his recent 16-day, 1,556km ride from Thurso to St. Catherine’s Lighthouse. You can pick up the story from Day 00. […]

We use cookies on our website to give you the most relevant experience by remembering your preferences and repeat visits. By clicking “Accept All”, you consent to the use of ALL the cookies. However, you may visit "Cookie Settings" to provide a controlled consent.
Cookie SettingsAccept All
Manage consent

This website uses cookies to improve your experience while you navigate through the website. Out of these, the cookies that are categorized as necessary are stored on your browser as they are essential for the working of basic functionalities of the website. We also use third-party cookies that help us analyze and understand how you use this website. These cookies will be stored in your browser only with your consent. You also have the option to opt-out of these cookies. But opting out of some of these cookies may affect your browsing experience.
Necessary Always Enabled
Necessary cookies are absolutely essential for the website to function properly. These cookies ensure basic functionalities and security features of the website, anonymously.
Functional
Functional cookies help to perform certain functionalities like sharing the content of the website on social media platforms, collect feedbacks, and other third-party features.
Performance
Performance cookies are used to understand and analyze the key performance indexes of the website which helps in delivering a better user experience for the visitors.
Analytics
Analytical cookies are used to understand how visitors interact with the website. These cookies help provide information on metrics the number of visitors, bounce rate, traffic source, etc.
Advertisement
Advertisement cookies are used to provide visitors with relevant ads and marketing campaigns. These cookies track visitors across websites and collect information to provide customized ads.
Others
Other uncategorized cookies are those that are being analyzed and have not been classified into a category as yet.
SAVE & ACCEPT